Another great game for iPhone and iPad.

Stick Wars is simple. Defend the wall at all cost.
No matter what comes your way you must end the round repelling all siege engines and assailants.
Starting out, Great Defender!
The iPhone and iPad versions are identical but I’m working on the iPad version here, where the extra real estate just makes the game prettier.
The principle is simple: a bunch of hooligans is laying siege to your fortress, represented by a wall on the left of the screen, and every so often they send an army to test your defences. All assaults come from the right.

Primary Weapon
To start the game you get one weapon: you. Or at least your fingers. You can left and throw assailants high into the air and they squish pleasantly as they hit the ground. You can also throw them into each other in mid air.
Squish!

Very satisfying.
Prisoners of War
Instead of squishing you can elect to take the enemy prisoner. To do this just drop them gently into the prison.
Prisoners score more points than kills but more usefully can be converted into weapons themselves.
Counter Attack
Simply send your brainwashed captive directly against those mean assailants! Your own micro army.
Suicide Bomber
You can elect to convert one of your prisoners into a walking bomb.
Set him going and when you trigger the bomb watch the carnage.
Schools
The game includes three schools where you can retrain your captives. Three careers are available to the newly initiated:

Magic
Some of the assailants are difficult to defeat by normal means. This means you need some special measures.

Obviously all this uses up your magic power, or manna so timing can be crucial, but it does build up again as time goes on – faster with mor wizards.
Siege engines 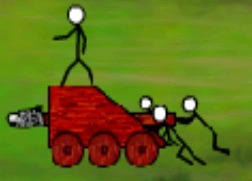 As the game progresses the assailants will produces catapults and such that make short work of your wall. You can destroy these by throwing assailants at them but more effective is the suicide bomber! And he can take out a fair few siege engines at a time too.
Here there be monsters
After a while the attacking forces are able to call upon hardier beasts to try and breakdown your defences. You can’t directly attack these with your almighty powerful finger of doom but you can use your magic and will have to.
After the Battle

You get a nice rundown after each assault on how you did and how killed the opposition. You earn money, and points, from how and how much you killed.
Between each battle you get to spend your money. You can rapid repair the wall, train more archers, wizards and repairmen, improve the wall etc.
Any money unspent earns interest.
Extras
You can purchase add-ons for the game from the now compulsory store. It isn’t necessary though. Worth a look but unless one of them takes your fancy I’d leave them alone. Bunny army is funny though.
Review:
Fun game. Not perfect but passes a few minutes here and there and can – if the mood takes you – eat away an hour or so. Very nicely animated and the feel is not lost at any point (except in the store).
Rating: 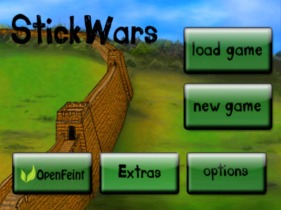 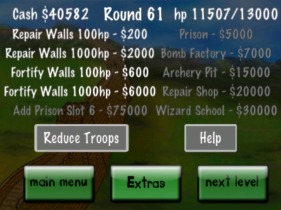 Let battle commence (gotta love the guy with the arrow in the head!) 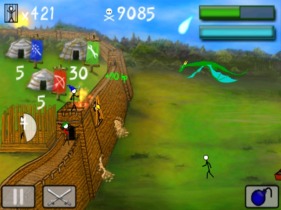 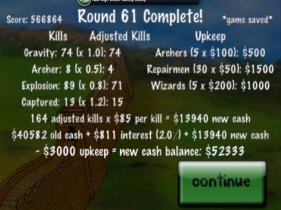 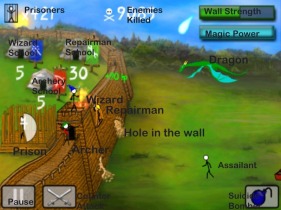 A bit of annotation

"Thoughts of an idle mind." Information Security professional.
View all posts by harlekwinblog »
« Certified Security Professional
Apple in the Media »