Monster: A movie with no redeeming features

First point, this is the production from The Asylum and not any of the multitude of other movies of the same or similar name.
Second point, I am urging everyone to please ignore anything by The Asylum. This is truly the worst movie I have seen.
I have seen bad films but this…
…unless you look out for rubbish movie – then please look up The Asylum, just your thing.
Title: Monster
Version: Uncensored Edition
Tag: The truth will finally be told.
Certificate (UK): 12 (main feature), 15 (extras)
Format: DVD
Extras: “” (not actually on the DVD), Making of…, Trailers
Starring: Sarah Lynch, Erin Sullivan
Director: Erik Estenberg
Production House: The Asylum
Production date: 2007
Synopsis:

Review:
When I forced a few friends and family to watch “Hercules in New York” I thought that the nadir of movie making. Many movies have since proved me so so wrong.
Monster is a blatant Cloverfield rip-off. The Asylum specialise in close-release DVD clones of current or recent blockbusters. Here we have a handy cam mess with not one single redeeming feature.
The worst of it is that the movie continues with almost nothing happening for it’s entire running length. The Monster is only seen a-glance and is exceptionally poorly rendered.
The handy cam nonsense allows the producers the ability (also used in Cloverfield) to mask the Monster in static and camera artefacts. The two leads (named Sarah and Erin as per the actresses playing them) are supposed to be attempting to make a Global Warming documentary but if their equipment malfunctioned this much they would be hard to make the “TV static” elements use in Poltergeist. The only word that describes the video quality is appalling.
The audio is worse. The 5.1 surround sound appears to mean they have used screaming crowd backgrounds, much much louder than the main dialog, even though such crowds are almost never present. Also the perpetual groaning from the Monster is simply annoying.
The editing is deliberate and destroys any feeling of continuity of threat throughout the movie. Any hint of the Monster (or the need for any other special effect) and the handy cam splutters and dies.
It must have been an amazing money saver that.
But basically the Monster just doesn’t make an appearance beyond a couple of rapid tentacle shots. Indeed the awful Tentacles (which at least boasts the talents of Shelley Winters) puts Monster to shame, mainly by having the guts to try some special effects.
The two leads simple don’t cut it as actresses either. Leaden. Dull. Boring. Emotionally inert. They are none of those but go off on one so much as to make you suspect they’ve just escaped from an asylum (sic) themselves, found a handy cam and then filmed their joint decent into madness.
And that really describes the entire movie. You simply never get to a position of empathising or trying believing in what you are seeing, or not seeing to be more accurate.
Hidden Special Feature:
See how many mistakes you can spot!
I’ll start you off.
The sleeve says the action takes place n 2005 but the movie states 2003.
Conclusion:
As mentioned before, best avoided.
Rating:

Dead extra! Note the cleavage shot, quite common in this feature.

Teary joy as we approach the end of the feature! 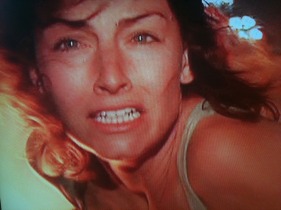 All images copyright of their respective rights holders, either Lighthouse DVD (packaging) or The Global Asylum (movie).
– Posted using BlogPress

4 thoughts on “Monster: A movie with no redeeming features”