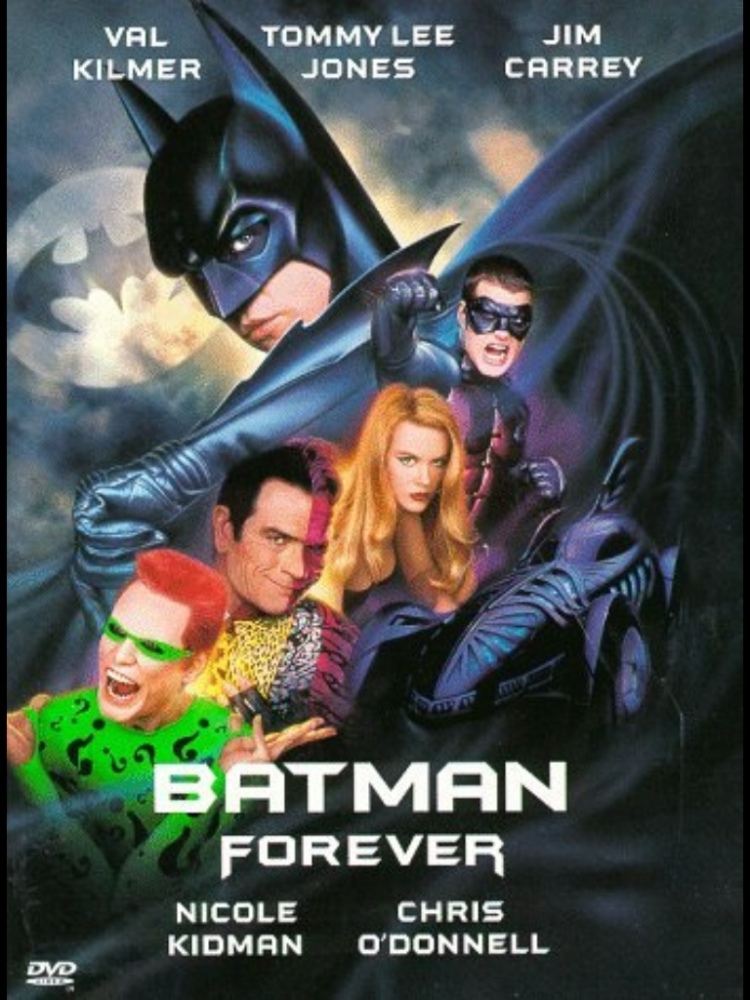 Batman faces up once again to two adversaries but this time, he gets help. Whether he wants it or not.
Batman finds that at times he can be his own worst enemy, potentially even create his own new challenges.
When Edward Nigma (Jim Carrey) is fired by Bruce Wayne (Val Kilmer) over fears his invention would be dangerous he becomes the Riddler and forms an alliance with Harvey “Two Face” Dent (Tommy Lee Jones). Two Face himself blames Batman for his horrific injuries, which themselves led to his mental instability.
When Two Face is responsible for the deaths of all but one member of the Flying Graysons acrobatic troupe, young Dick Grayson (Chris O’Donnell) looks for revenge.
Can Bruce control the youngster And defeat this anarchic duo?

Rather strange movie this. The scenery and general photography is highly exaggerated and cartoonish which is such a departure from from the first two movies it actually feels crass.
Val Kilmer’s only outing as The Bat isn’t that strong but good enough. Chris O’Donnell is a good, if perhaps too old choice for Dick Grayson. To be frank, Jim Carrey makes this movie the fun it is. That is not to put down Tommy Lee Jones too much. I like him as an actor and enjoyed his performance but it missed the mark by just a fraction.
All the normal gadgets and such – though the Batmobile is awful in this one.