Huge and rare pink diamond becomes the target of several thieves, including the famous Phantom.
But this time Inspector Clouseau is close on his heels and is determined to capture the jewel thief and end his long criminal career.
Unfortunately for the owner of The Pink Panther diamond, a Princess (Claudia Cardinale) , Inspector Clouseau (Peter Sellers) is not only extremely unlucky but also fairly inept.
He becomes convinced that socialite Sir Charles (David Niven) is the Phantom but struggles to prove it.
The bumbling detective has indeed identified the correct criminal but with Sir Charles’ nephew trying to steel the diamond as well, things get very complicated.

A wonderful master class of a slapstick movie this. Peter Sellers at his glorious best, though not the huge lead in this movie that our memories would portray. David Niven’s gentleman thief is the lead and he plays the role marvellously. Beyond these two the main characters are Clouseau’s wife (Capucine) and Sir Charles’ nephew (Robert Wagner) and they support the two leads through a series of events mostly revolving around a fancy dress party.
This is a very funny movie and rightly remembered for Sellers completely scene stealing detective.
At the time of writing the movie is just a year shy of its Golden Anniversary. Any movie that is still funny after 50 years is a classic.
Of course many of the cast are no longer with us (only Wagner survives of the top billings) and this is a nice stage to catch so beautiful talents, like John Le Mesurier and Michael Trubshawe as well as the main cast. 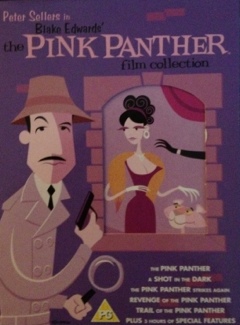 "Thoughts of an idle mind." Information Security professional.
View all posts by harlekwinblog »
« Spam? Tell me why!
Day 069: A Shot in the Dark »