That’s the power, the power of love…

An Eighties teen is sent back in time and accidentally prevents his parents from hitching up.
Can he correct the error before he ceases to exist?
Eccentric scientist Doc Brown (Chris Lloyd) builds an experimental time machine out of a DeLorean, and some stolen Plutonium.
After a success test, in front of a bewildered Marty (Michael J Fox), Doc is a bout to make the inaugural journey when the terrorists he hired to steal the Plutonium turn up.
As they kill Doc, Marty is faced with no choice but to try and escape in the DeLorean. However, he accidentally triggers the time travel device and ends up in 1955!

There’s a nice, decent build up to this movie that is often under or over done. Here it’s just about right. Getting into the 1985 minds of the McFly family and those around them, especially Doc.
There’s no real need for special effects in most of the movie, reliant on the acting talents of the cast more than anything else. Though the burning tyre tracks are a legend in their own right.
Although this definitely led by Michael J Fox, very well too, the supporting cast are well chosen and fit well together.
Special attention must go to Christopher Lloyd, of course who was born for this roll. Dr. Emmett Brown is a gorgeous character for him to inhabit and both 1955 and 1985 versions are believable.
Crispin Glover and Lea Thompson are spine tinglingly good as the “parents that may never be” of the McFly clan.
I actually bow to the talents of Thomas F. Wilson though. Without him holding down the villain of the piece, Biff, this movie could easily have failed.
The real central thing about the movie though is the humour. There are a huge number of “in” or “knowing” jokes throughout and a pretty good spread of slapstick for good measure. 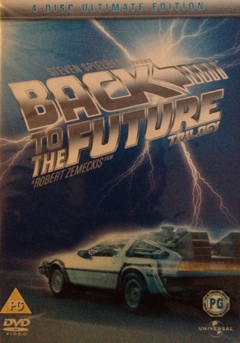 "Thoughts of an idle mind." Information Security professional.
View all posts by harlekwinblog »
« Day 079: Cocoon: The Return
Day 081: Back to the Future II »