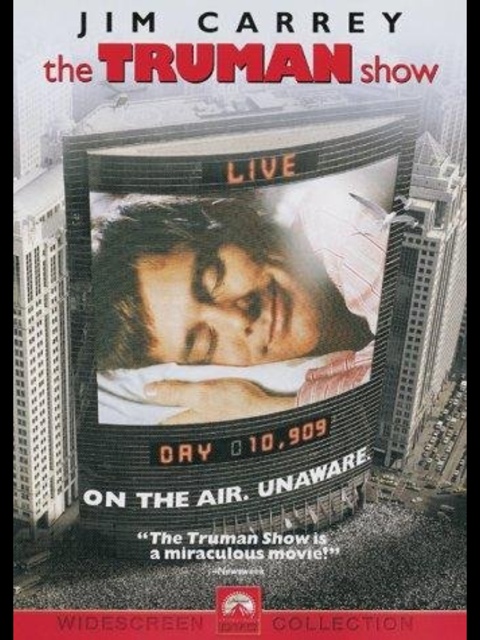 “in case I don’t see ya, good afternoon, good evening and good night.”

What if your entire life was a choreographed television show?
Birth, Marriage and even Death?
Truman Burbank (Jim Carrey) has lived out his life on the little island community of Sea Haven. It is a comfortable life but somehow he feels unfullfilled. There must be more to life than this?
He’s happily married to Meryl (Laura Linney) but seems to yearn for a lost love from his university years (Natasha McEhlone). He has a reasonable job in insurance. He has a great best mate, Marlon (Noah Emmerich). But the feeling that life is more than this won’t leave him alone.
A series of peculiar coincidences though start to make him paranoid.

Each and every odd occurance is explained away by the people around him but Truman is not convinced and decides to try and put his theories to the test. He believes that his entire existance is choreographed, acted. And he is going to prove it.
What Truman doesn’t know is how accurate his thoughts are. He is the central character in a smash hit TV programme that has been following his life since birth. His mother, father, best friend, even his wife, are all actors hired by Christof (Ed Harris). Now Christof battles to keep Truman happy and the programme going amongst the technical hitches and invading ex-actors. Can he stop Truman finding the truth of his existance?

This is a stunning, original piece of cinema. I really rate this movie highly. Although this a comedy there are strong statements about how we accept the truths around us. Not to overbear the point though, the humour is the thing here.
All the odd little items in the story as Truman gets more suspicios are well constructed and designed to lead the audience into his small, isolated even lonely world. Flashbacks and TV Programme reruns show us some of the background effectively.
At the very heart and soul of the movie is Jim Carrey. We all know his comic talents, which are not wasted here, but the emotion he brings to Truman Burbank is surprising. Without this skill from the actor the movie would have been an empty comedic shell.
Ably supported by Noah Emmerich and Laura Linney (say that five time quickly) Carrey is able to raise this movie to touching the Modern Classic sort of feel. I honestly believe this will go down as his finest hou. Or hour forty five even.

"Thoughts of an idle mind." Information Security professional.
View all posts by harlekwinblog »
« I WANT ONE!!!! Ⓘ ⓌⒶⓃⓉ ⓄⓃⒺ!
Day 095: Pirates of the Caribbean: The Curse of the Black Pearl »