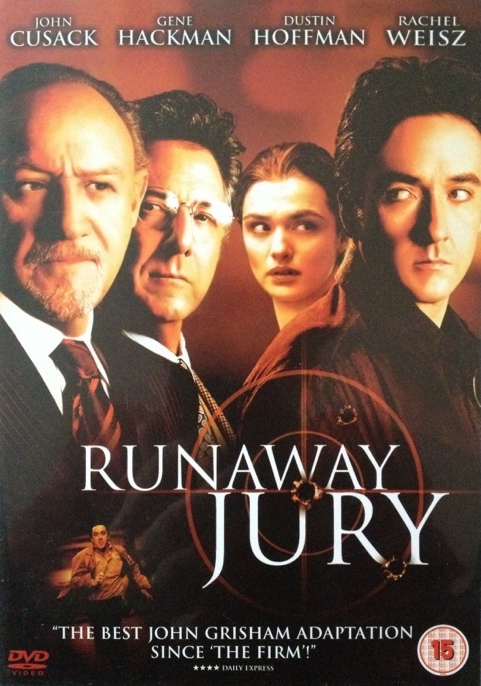 A civil trial is taking place between the widow of a murdered stock broker and the gun company that manufactured the arms used by the assailant.
In the jury pool is a game store assistant who seems extremely eager to not be put into service.
The judge isn’t amused and practically orders him onto the jury.
But now a war of wits begins as this is exactly what he wanted. But he isn’t the only person trying to influence the jury and therefore the outcome of the trial.
The harrowing story of Jacob Wood’s death starts a chain that allows Nicholas Easter (John Cusack) the opportunity he seems to have been waiting for. Working with Marlee (Rachel Weisz) he starts to profile the jury from the inside.
Working for the plaintiff, Celeste Wood (Joanna Going), is Wendell Rohr (Dustin Hoffman). Knowing that no similar gun liability trial has ever succeeded he still takes on the powerful gun lobby who themselves have hired an expensive team. Leading the defence is Durwood Cable (Bruce Davison) but he is just the public face, the necessary persona required in a room of court.
The real power behind the defence team is a jury advisor, Rankin Fitch (Gene Hackman). Not only is he advising the defence on jury selection though, he has been hired to directly influence their actions during the trial – by whatever means necessary to find against the plaintiff.
As Rohr’s idealistic approach to the law and Fitch’s disrispect for due process clash they are both approached by Marlee with a proposal.
She has someone on the jury. Said juror can throw the decision any way she wishes. Now it is a matter of who will pay more?
But even as the paintiff’s team reject the offer, Rohr knows his reputation and career are on the line. Can this girl really out do him at his own game?

With such an exceptional cast it is fair to say expectations are extremely high for this movie.
Dustin Hoffman is ideal as the lawyer with unshakable principals and a set-in-stone trust that the process is true and correct.
Gene Hackman is gnarled and impatient and verges on the malevolent as his character twists and draws the knife across the lives of the jurors.
Rachel Weisz and John Cusack should struggle in this company but really hold their own. Very well too. The characters come across (for the majority of the movie) as two opportunistics, possibly too naive, young persons looking to make a lot of money. As the plot becomes more complex and more of the back story is revealed it isn’t necessary for the actors to change what they’ve been doing – the characterisations continue and are still fundementally believable. That is acting skill. Plus of course good continuity and direction (take a bow Gary Fleder).
The plot is one that would likely be discussed much more in the US than elsewhere, especially here in the UK. I think for some people the rewrite of the script from a anti-smoking stance to an anti-gun one will be a problem. They were likely to lose out either way. But get past this and there is an excellent drama to be watched.
I like the plot. I guess I will have to read the John Grisham original (back to the anti-smoking stance) at some point.
Support cast? Well – the performances are packed in here. The close proximity of the jurors allows the film to draw us into the characters simultaneously, expanding several personalities at once. Eceptional writing. Stand out performances? Bruce Davison, too often seen in B-Movies, plays the defence team lawyer well, showing him to have absolutely no control or decision making powers. Bruce McGill as the president judge. Nick Searcy and the investigator looking into Marlee’s past. Too be honest everyone does well. If you have a favourite supporting role in this movie let me know.
Unusually for a courtroom drama, the movie has a couple I action sequences and spreads the plot, as such, into current day events rather than what happened to bring everyone into the courtroom; in a sad way the death of Jacob Wood is almost incidental.
Courtroom dramas are potentially the stuff of legend. The Verdict. 12 angry men. To kill a mockingbird. A few good men. Kramer Vs Kramer. The Accused.
Does Runaway Jury stand up to this fine set of movies? I believe it does, just. The acting pulls and draws you in. This really is a power struggle of a movie. Of course it’s great to see two such excellent actors on screen together for the first time but this script transcends that – the whole is much more than the parts.

Things to look out for: all four lead performances, tearing an apartment to shreds, dining with the Judge, nasty gun manufacturers, “You’re losing me my jury!“, sequestering the jury, the machinations of both Fitch and Easter as they influence the jury, “Trials are too important to be decided by juries.“, fallible nature of all of us shown in the histories and hearts of the jury, Marlee and Easter’s history, motivation, “ok, let’s go home.”
Released: 2003
Certificate: 15
Cast: John Cusack, Rachel Weisz, Gene Hackman, Dustin Hoffman
Rating: gripping drama, very highly recommended