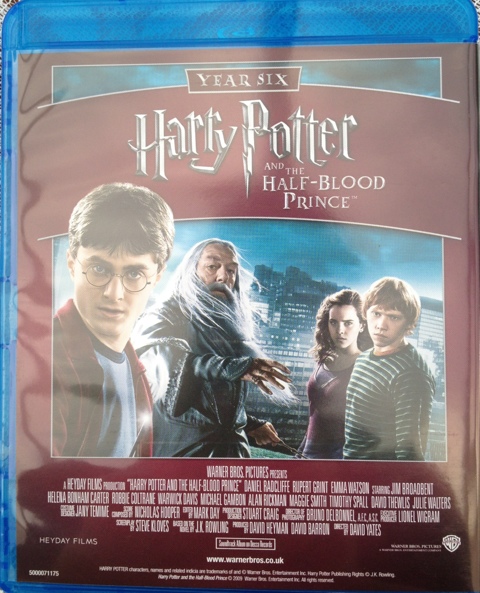 Harry Potter is back at Hogwart’s and Dumbledore has a particular task for the young wizard.
Struggling to come to terms with the loss of his Godfather and the danger he (Harry) represents to his friends, Harry Potter (Daniel Radcliffe) is asked to befriend an old friend of Dumbledore (Michael Gambon), ex-Prof. Slughorn (Jim Broadbent). Indeed, Harry proves his worth when just his very presence convinces the old Professor to take up his old post, Potions Master.
That of course leaves Prof. Snape (Alan Rickman) free to take up the post he has always craved, Defence Against the Dark Arts.
Harry, Ron (Rupert Grint) and Hermione (Emma Watson) soon learn that Snape has entered into an Unbreakable Vow with Drako Malfoy’s (Tom Felton) mother, Narcissa (Helen McCrory). Help Draco in his deed, set by the Dark Lord, Voldemort (Ralph Fiennes), or do the deed himself if Draco fails.
This confirms Harry’s misgivings about Snape, also Draco, and so spends some of his time trying to find out what the pair are up to.
But, above all, Harry must befriend Prof. Slughorn and prices from him a memory of Tom Riddle that may give Dumbeldore the last, final clue as to how Voldemort may be defeated. Dumbledore takes Harry on several trips through “memories” using a device called the Pensieve. All these memories relate to Tom Riddle but are incomplete – or tampered with in one case.
Harry must get this vastly important memory from the Potions tutor. Even then, perhaps darker adventures are visible on the horizon.

No, wait, that’s not right… …anyway, let us start positive and move our way back, via the low points, to another high point.
Only two really new character is introduced in this movie – the first is Prof. Slughorn. Jim Broadbent is curiously effective as the charming potions master who “collects” the most interesting, powerful or talented of the wizarding world.
Introducing Lavender Brown, played in a sweetly hammy way by Jessie Cave, adds spice to the relationships between Ron, Hermione and Harry. Indeed all three leads are now well and truly acting their socks off. We get the first glimpse of the laid back, yet driven, character that Daniel Radcliffe is going to bring to Harry Potter in the later movies. Some regulars are specifically allowed to grow, in particular Ginny and Draco. Bonnie Wright seems to flourish in bringing the romance and a little more grounding to the story. Tom Felton has been under-used in some of the stories but this story uses Draco as an important plot device and Tom doesn’t let us down. I actually felt sorry for Draco in this movie.
The effects are dramatically notched up again. The cave scene is excellent cinema, top notch stuff for absolutely any film. All the pensieve scenes have an eery feel to the cinematography. We have some impressive property destruction here too.
Alas there are flaws in this movie.
The biggest failing is the almost total disregard for the nature and presence of the “Half Blood Prince“. My heart sank when the movie finished with that ludicrous, half hearted [sic] throw-away line from Alan Rickman as Snape. Poor form, plain and simple.
Indeed although the book is long I think they have played with the story a little too much here. The trips in the Pensieve are so abridged no sense of the journey that Tom Riddle makes in creating the Horcruxes can possibly be discerned. There are other examples throughout this movie on the liberties taken with the source material. Some aren’t actually bad – I like the addition of the Millennium Bridge scene – but the fell is changed dramatically as a result of some of this tweaking.
We also get no indication of how Snape approaches his much sort after role as Defence Against the Dark Arts tutor.
Getting back to the positive vibe though, Half Blood Prince is a good, exciting, funny and charming adventure. The visuals (see above) are excellent and the acting doesn’t let the move stammer or pause. The final scenes allow the audience to empathise with the devastation that they feel their lives are now in.

Things to look out for: “You must not fail!“, Millennium Bridge, “Is that considered a dangerous profession?“, Ginny and Harry, “But I am the Chosen One.“, Armchair Professor, Pensieve, “Nice face, Potter!“, young Tom Riddle – played with creepy certainty by Frank Dillane and sheer viciousness by Hero Fiennes-Tiffin, “Farewell, Aragog – King of the arachnids.“, the Locket Cave, Ron’s journey to stardom, “I’ve been asking myself that same question for the past six years.“, poor Hermione, “Severus, please…“, final loss of their biggest role-model, “I never noticed how beautiful this place is.”
Released: 2007
Certificate: 12
Cast: Daniel Radcliffe, Rupert Grint, Emma Watson, Michael Gambon, Robbie Coltrane, Richard Griffiths, Maggie Smith, Fiona Shaw, Tom Felton, Alan Rickman, Jim Broadbent, Helena Bonham Carter, Bonnie Wright, Timothy Spall, Julie Walters
Rating: flawed interpretation gets away with murdering the original material, but does get away with it, highly recommended
🌟🌟🌟🌟🌟
Part of “Harry Potter, The Complete 8-Film Collection”
;